SHUMPUKAN (The name of our Dojo) “The slashing action of a sword blade is like the flash of lightning in the spring wind”.

The name Shumpukan was inspired by the above line from a poem, the poet was named Basho(1644-1691) and he wrote that “the slashing action of a sword blade is like the flash of lightning in the spring wind” Shumpukan – Hall of the Spring Wind. Basho was his art name but he was born as Matsuo Kanefusa at Tsuge in Iga province. He made the kind of poetry known as Haikai or Hokku popular ( 3 verses of 5, 7 and 5 syllables respectively)

In the early Meiji period (1868-1911) this was the name of the dojo of Yamaoka Tesshu, often considered as the last of the great swordsmen of Japanese martial history. Tesshu believed in unbelievably hard practice as this was the only way to achieve mind and body in harmony when fencing. It was Tesshus understanding that there was no sword outside the mind the sword of no sword, or Muto. Today, many Dojo in Japan still have this name and one, in Kumagae, Saitama-ken Clive Sinclaire visited in 1985. The British team, who spent time in Japan prior to the World Kendo Championships, Seoul 1988, also trained at this dojo.

Born in 1836, Tesshu was the fifth son of the hatamoto (direct vassal to the shogun) Ono Yomoemon. Called Tetsutaru in his childhood, Tesshu learned the Itto style of fencing from his father at an early age and on his father’s death when he was seventeen, he returned to Edo (nowTokyo). Here he joined the fencing school of Chiba Shusaku, another great master, and learned the Hokushin Itto style. Although very skilled at fencing, he was feared for his wild and unruly behaviour. At the age of twenty he was adopted into the Yamaoka family who had long showed favour to the Ono.

At the age of twenty-seven, Tesshu challenged Asari Matashichiro, a renowned master of swordsmanship, to a match, but his best efforts failed to beat Asari. His defeat gave him a great sense of humiliation which he never forgot and he spent every spare moment in thinking about how to beat Asari. He threw himself even more into hard training and Zen Buddhism.

This was a turbulent time in the history ofJapanas loyalist troops were successfully trying to overthrow the shogunate and re-instate the Emperor to direct rule of the country. Tesshu, with other young men, were active in the politics of the time, but as the Imperial army (under Saigo Takamori) advanced along the Tokaido to Edo, Tesshus knew the Tokugawa Shoguns life was under direct threat as well as the city of Edo being in danger of being raised to the ground. Tesshu fearlessly walked up the Tokaido, through the Imperial troops with a letter for their commander. He said when questioned at the outset that he would probably be arrested and beheaded but was certain to be questioned before his execution at which time he say that he was there to see Saigo. He succeeded and helped broker a peaceful solution which, as well as saving the shoguns life also saved the city of Edo which was renamed Tokyo. It was for this brave deed that the common folk remember Tesshu. After the Imperial restoration, Tesshu retired with the deposed shogun Yoshinobu in 1869 to his domain in what is now Shizuoka Prefecture until 1872 when he was employed by the new Meiji government. In the following year he was made a chamberlain to the emperor and was thirty-six years old at this time. 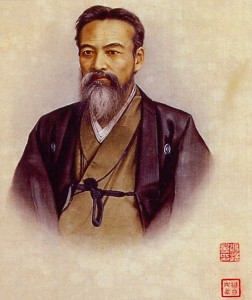 Tesshu, as part of his understanding of Zen Buddhism became a prolific calligrapher and his work was much sought after. He was still as wild and unruly as ever but continued his hard and demanding Kendo practice and managed to drink prodigious amounts of saké. However, one morning in March 1880 he awoke to a vision of Asari Matashichiros sword but it appeared to be different to the way he had imagined it many times since his defeat and it appeared no longer to threaten him. Seventeen years since the last time, Tesshu confidently challenged Matashichiro to another match. The challenge was accepted and soon they confronted each other. This time Matashichiro, on seeing his opponent’s posture, lowered his wooden sword and asked how Tesshu had managed to develop such a high level of skill. Immediately, master-ship of the Ono branch of the Itto School was conferred on Tesshu.

In 1887 a Shishaku (viscountcy) was bestowed on him but in the following year he contracted stomach cancer. On 19th July 1888, he donned a white kimono, assumed the sitting position adopted during Zen meditation and died. One of his pupils painted his portrait at this time. His funeral service was attended by over 5,000 and went near the Imperial palace where it was said that the Emperor Meiji watched from a window. 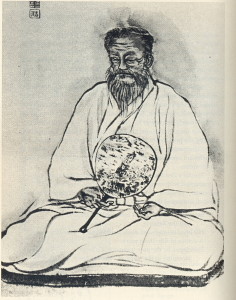